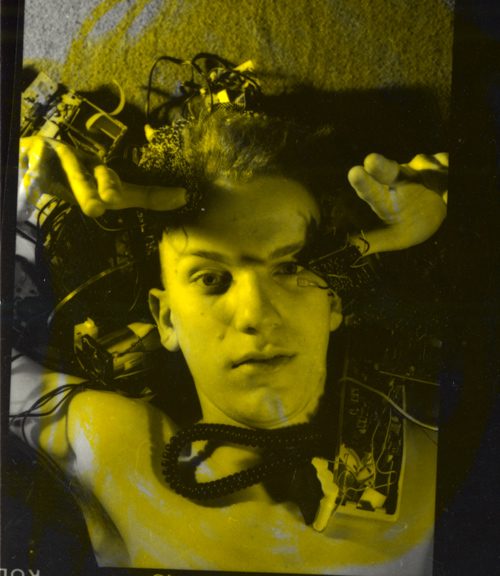 Since 1987, Mohr has been experimenting with the darker sides of electronic music and releasing compilations of his ground-breaking work on cassette, CD, vinyl and digitally. File his music under: darkwave, electronic, tech-house, goth, classical, ambient, experimental – certainly an artist who has explored a vast range of territory. He has been described by Neoist performance artist Istvan Kantor as an “electro-zombie aficionado”.

One thread, difficult to pinpoint exactly with all the fracas, is Mohr’s vocalizations which have been present from his first experiments in 1987; as influences he claims: Mick Jagger – his first obsession – Holly Johnson, Pete Burns, Marc Almond, Douglas McCarthy, Nivek (Ohgr) Ogre, Folke “Ledernacken” Jensen, Edward Ka-Spel, Andrew Eldritch and of course Peter Murphy. Despite accusations, Mohr was fairly clueless about David Bowie, Iggy Pop and Nick Cave until too late in his singing career.

In his initial period, Mohr was bringing many sounds under the Audio-Yo umbrella. Starting with his Blue Visions activity, he began splitting his efforts under various artist names. His currently active projects include Dead Red Velvet and Inner Space Voyage.

Mohr started his own one-page mail order cassette label in 1991, Positive Vibe Entrainment [sic], which carried through until 1998. Mohr was affiliated with the Calgary-based label Interdimensional Industries from 2001-2008, releasing CDs and vinyl projects, and being the mastering engineer on many projects for the label. Further releases resulted, 2004-2014, on his own Multibeat Records label.

His entire back-catalog is being curated and remastered for Tape Life Records.

Karl Mohr Audio-Yo was the primary artist name used by Canadian composer/producer Karl Mohr from roughly 1987-1998. With a high volume of recorded output – some 35 cassette releases even before the CD releases, curating and genre-consistency were not at all the focus, and albums often included whiplash dialing between disparate musical genres. As pure creative output, this was impressive and interesting, but lacking focus and overall vision. Of the genres that emerged, the primary drives turned out to be:

In order of chronological development, the side-projects grew into legitimate pursuits in their own right.